You are viewing: Home » Myler 06 Eggbutt without hooks 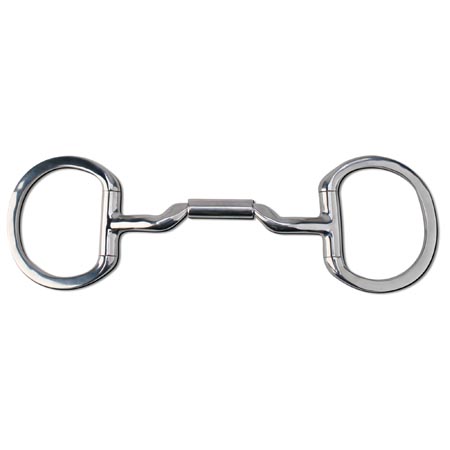 This is dressage legal

The MB 06 is a Myler alternative to the traditional mullen, but it has a wide low port that allows the tongue to pass under it comfortably. The port is ¾" high, just enough to allow the horse’s tongue to elevate slightly and swallow, but not high enough for palate pressure. When the reins are engaged, the 06 applies pressure primarily to the bars and lips. Mouthpiece is 14mm at the cheek.
•Independent Side Movement
•Stainless Steel Mouthpiece
•Curved mouthpiece does not pinch lips and bars
•Copper Inlay
•USEF 2012 and FEI 2016 Dressage Legal. Consult rulebook for more information.

An eggbutt is a traditional cheek style which keeps the mouthpiece from draping on the tongue, providing a more direct signal than the loose ring. The straight side of eggbutt will not pull through the mouth and does not pinch. For a more versatile version, see the eggbutt with hooks.

Changing bit has made an enormous difference to a little horse we are bringing back into work, having been turned out by previous owners due to way of going/attitude issues. From the last third of a hack he would be fussy in his head, to the point of head shaking. This completely stopped from the first time of using the Myler bit and he generally has a more positive way of going. I was first recommended Myler bits by the horse dentist, Mark Youngs and this is the second TB I have that really seems to like them.