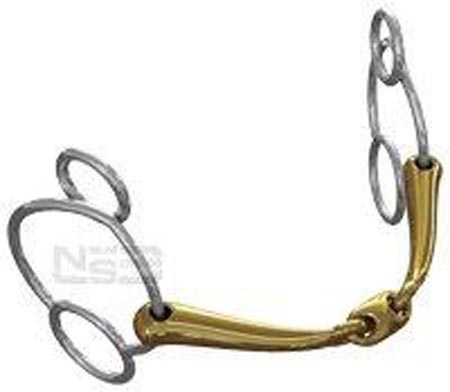 The NS Tranz Universal offers control without discomfort or severity. It is brilliant for faster work such as jumping as you can turn much more easily. The Universal also helps to eliminate the head toss when asking for a downward transition, or shortening in between fences. If you need to upgrade from a snaffle, it is highly recommended as it offers varying degrees of control. Also an excellent training tool prior to introducing the doubles for employing two reins and a curb strap.

My lovely ex racer has a "difficult" mouth. After sorting through issues with tongue over the bit, he was now ready for something more subtle. We tried a couple of different bits, a hanging cheek made him lean very heavily, an NS Verbinded didn't give me sufficient brakes. After discussing this with the Horsebitbank, we decided to try this bit and it has worked a treat! He is now a lot softer and more consistent in the contact, and also responds half halts. Thanks you Horsebitbank for your advice and the invaluable "try out" service.

brilliant, we were using a a neue schule eggbut snaffle on our 6yr old fell pony which was great when schooling althought sometimes he would hold on to it, but felt we needed something which would make him listen when out in open spaces but still wanted the snaffle mouth. The universal has been great and we also feel it gives a little extra brakes if need with the addition of the curb strap.
Very pleased

This bit has been the perfect transfer for my 18hh 4 year old shire horse. He started on the Neue Schule Tranz Angled Lozenge Full Cheek (as he had issues turning being a youngster) but then started to push through. Other aides were concentrated on but he still refused to slow down. Other bits were tried and he hated them i.e. gag, pelham. It was only when I found this Universal in 6 1/4" he is now working well with the very lightest of touch. I would recommend this bit as it gives you many options of control from the lightest to the bottom hole or curb chain which I use when he's in an exciting situation. Also 'Ben' started to refuse the other bits but because of the warm metal he now accepts which is a godsend when you've got a tall horse who can lift his head VERY high.