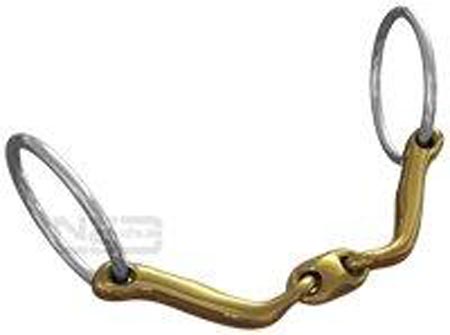 This is dressage legal

Heavy on the forehand? The NS Verbindend greatly emphasises the signals through the rein. By encouraging clarity of the aids, and promoting a true outline the freedom through the shoulder can be developed, thus promoting self carriage and thoroughness. The NS Verbindend eradicates tongue evasions by creating a channel for the tongue to lie in allowing the horse to soften and relax through the jaw. This mouthpiece can also enhance the development of the bend for lateral work and smaller circles. The 12mm bridoon with neat 55mm rings is used with the Weymouth or on a small head. The 12mm with the 70mm rings normally offers extra lift from the shoulder and takes up less room in the mouth than thicker mouthpieces. If you are a pleasure rider and simply desire to establish a lighter, softer way of going this is the bit for you.

My young stallion tried a lot of bits in the Czech Republic and all the bits refused. This bit is perfectly for him as the only one

I have been using the Verbindend loose ring for a few weeks now mainly on our young horses who were in the starter snaffle, i feel like its started to help more with self carriage and softness whilst maintaining a forward and supple neck. I'm really pleased with the effects its having and i certainly feel its making a difference. I have also recommended it to a couple of clients who are at similar stages of training with their horses too

I recently hired the Neue Schule verdibend loose ring bit from The Horse Bit Bank and cannot praise it, and them, eneough.
My little gelding has always "over fussed" on the bit resulting in him finding that he could draw his tongue back and not go forward, and then get his tongue over it and leave you with no control or head shaking in panic that his tongue was'nt where it should be!! I reluctantly tried a flash noseband but it did'nt stop the tongue thing and was like putting the "hand brake on".
Having spoken to the horse bit bank I tried a Myler 04 which he hated, but because of their brilliant service was able to go back to them and was recommended to try the Verdibend Loose Ring..., absolute magic. From the first time I put it on Sam he was so obviously happier, he's taking the contact forward softly and much rounder than previously and is lovely and light in the hand as I knew he could be. I am still having to use a flash at the moment as initially his instinct is to start drawing his tongue back as soon as the bridle goes on, but he is not now trying to get it over the bit and is still going forward properly, a joy to ride.
Thank you Neue Schule and the horse Bit Bank.